This couple purchased this land in 1911 when they married.  I am going to assume that they bought this land from one of Mr’s relatives as the same last name is listed as the first land owner of this section of land in 1891.  This couple retired from the farm to Boissevain in 1949.

Their only son John Robert, who was better known as Jack, farmed the property next door after he married in 1947 and moved away from his parents home farm.  Mr. was a member of the Independent Order of Oddfellows and acted as a trustee and chairman of the Fairburn School Division.  His wife was active in the Royal Canadian Legion Auxiliary and the Fairburn District Ladies’ Group.

The property was then sold to KA.  I cannot confirm any history of this family living here.  I can say that the home has been vacant for some time as there is no longer much of a floor in the home and it is teetering on what is left of the foundation.

After KA owned the land the farm was sold to the Guide Family.  Again, I cannot find anything about this family even though it is recorded that they owned this property for approximately 17 years.  There is a good possibility that the land was purchased for the sole purpose of farming it and nothing more. 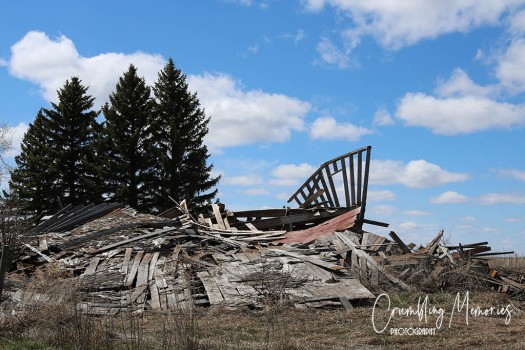 There were a lot of neat little finds around the yard, including this old ringer washer and stove.

I did some googling but I could not confirm anything I found.

There was a lot of old equipment there as well and I have to say that this was probably the neatest thing I found, aside from the piece of stove.

I contemplated going back to this property on this beautifully cloudy day, after I was told about it back in the winter.  I sure am happy that I did even though I didn’t get as much history as I would have liked, I sure did find some good photo opprotunities.