This afternoon Colton was feeling a little couped up and asked if I had any house hunting I wanted to do.  I can always house hunt!  So we headed out down a road that I wanted to check out.  About 15 minutes into the drive, we came upon this.

This was shot from the road with my long lens.  As I likely won’t see permission to investigate further, I can’t give a history on the land.  I also don’t have the proper resource materials at home and won’t be able to retrieve them until who knows when with the closure of our local library.

I have driven down this road numerous times.  I have never before seen this car.  And its not like you can miss it. 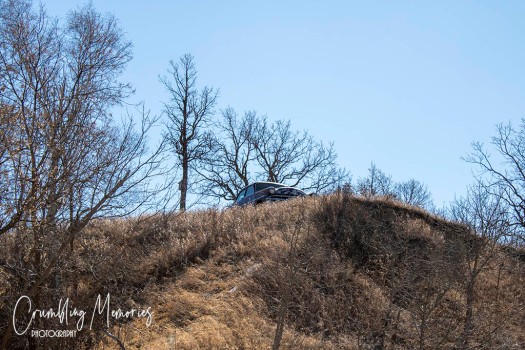 This photo wasn’t a great angle but I had somewhere to be and didn’t want to turn around.  Besides, its close to home and easy to get to. 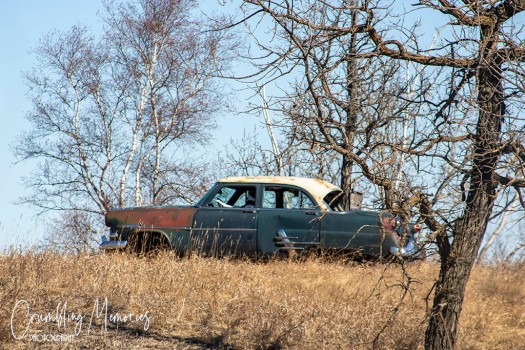 What a great place for this old car.  And I’m just noticing this now but doesn’t it look like there is someone sitting in the driver’s seat?

For the last week or so I have been seeing posts from other photographers who have offered to take photographs of families during this period of social distancing in our country in an attempt to stop the spread of COVID-19.  I saw small neighbouring towns participating in this activity and even though I don’t typically take photographs of people I thought, hey, its free, its fun, its history and its just a couple of photographs.  No posing, no direct contact.  So I posted on Facebook that I would be willing to do this in our community.

Within a couple hours I got a message from a family who lives in Killarney and runs one of our campgrounds during the summer but winters in a warmer location.  Ron & Cheryl spent their winter in Blythe, California and had every intention of staying there until mid-April until they were notified by their health insurance provider that they needed to be back on Canadian soil before March 23rd.  They headed home and arrived in their motor home, at the campground on March 21st.  They did not stop for groceries, they didn’t pick up their mail.  They went home, set up their home in the deserted campground.  They had a family member deliver their groceries and they began their 14 day self-quarantine. 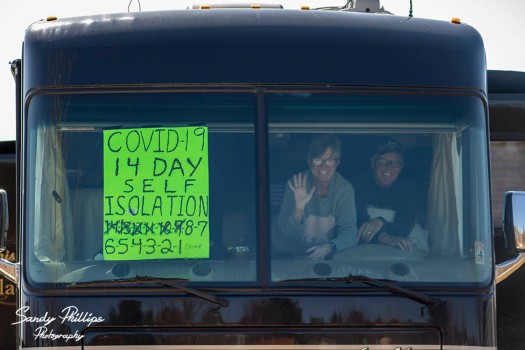 I know that there has been a lot of talk in this small town about who should be out and about.  Being in self-quarantine because you have just come back from another country does NOT mean that you cannot go outside and go for a walk or walk your dog.  So if you plan on calling the snitch hotline, don’t waste your time. 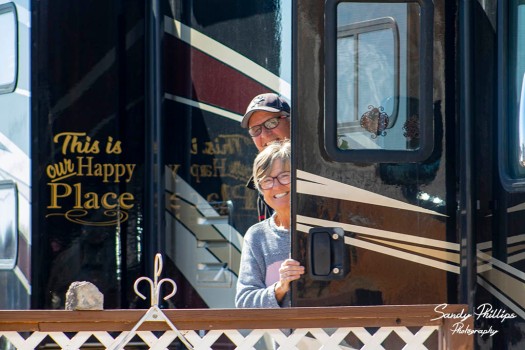 Cheryl and I discussed before-hand what kind of photos we wanted to take and I just followed them.

And while I look like I’m pretty close, I am not.  I used my 300mm lens for all of these shots.  Hence, some lost clarity and lack of depth of field.  Regardless, I love them.  These are the two most photogenic people I have ever encountered in my life.  I’d love to photograph them after their quarantine.

Thank you Cheryl & Ron for letting me do this with you today.  I can’t tell you how happy this made me.

On June 8, 1881 this family left their 50 acre farm in Ontario and headed to Manitoba with a cow, calf, wagon, a small amount of oats and a few small articles.  Arriving in Portage la Prairie by rail, the family waited there for two days before making their way west.  At that time they bought a Red River cart and a team of oxen. 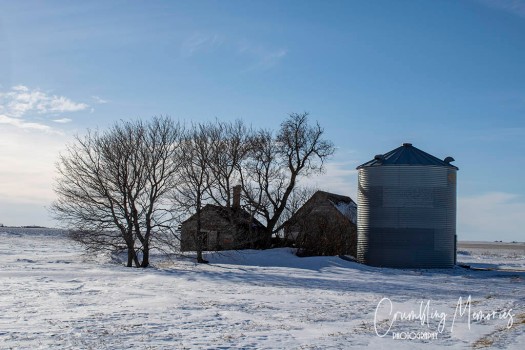 Upon arrival to the designated spot to choose a homestead, all the decent farming land was spoken for.  While having pancakes with another farmer, the man advised Mr. of land in another range.  The next morning he set out and this land was his.  Newly acquiring the property, the necessary arrangments needed to be finalized so he set out the next day to walk to Deloraine.  The walked seemed to take forever with nothing or no one in sight.  He finally came upon some aboriginals and spent the night with them, breaking bread.  They next morning they finished the trek together.  He then set back to Portage la Prairie for his wife and 3 children as well as their trunks, bedding, a churn for water and 7 fowl.  Mrs. and the 3 kids slept in the covered wagon at night during the week long trek to their land.  Upon their arrival they set up a tent at another farm while Mr. broke the land.

Mrs. was handy when it came to bread making and baked many a loaf for the bachelors.  At the time flour was $1.00 for a 100 pound sack.  She also tended to the ill and was a huge help to other pioneer women.

In 1882 the family sowed five acres to wheat and broke more to oats.  The crop was cut by cradle and was made to bands out of wheat ties sheave and stacked.  The following year, two men came along with a threshing machine they had just purchased in Brandon.  They cut the families crop for $25.00 and the families oxen were used to haul the machine to its final destination.  Mr. sold his wheat in Brandon, a trip that would take him 3 days  to make.

In the winter of 1884 the wife and 3 of the children came down with diphteria.  One of the children passed away as well as a female neighbor.  The family traveled to Brandon for medical attention.  That same winter, Mr. suffered from snow blindness but Mrs. poulticed his eyes with tea leaves until they were better.

The men traveled to 8 to 9 miles for wood.  They always took the cattle with them to allow them a good drink in the nearby river.

The family built their first home in 1899 with logs from the Turtle Mountains.  During their life they had 9 children, two of which died very young.  Mrs. passed away in 1932 at the age of 80 years and Mr. passed in 1937 at the age of 96.  Mr. was the son of Samuel, a descendent of Ireland to traveled to Canada by ship.  James obituary stated he was  practical farmer and a first class manager which resulted in him being a great success in his farming operation.  He was a great friend and was made an honorary member of the Manitoba Grand Orange Lodge.  At the time of his passing, he was the oldest Orangeman in the Province.

Their son Samuel who never married took on the family farm and upon his death gave it to his nephew Harvey.

Oh, this has been a tough one to wrap my head around but, I promised myself that I would not go out and photograph more properties until I dealt with the ones I had already taken, so….

Born in 1853, Mr. came to Manitoba as a young man from Ontario and purchased this land in 1881 for both surface and mineral rights.  In 1892 he purchased the SW 1/4 with surface rights only.

This photo was taken back in December during the Christmas break.  Looking at this photo now, I am actually impressed with the quality given that it was taken from the road, with the 600mm lens, hand held.  I must have had steady hands that day!

His wife Susan arrived in Canada in 1882.  She lived with her brothers around the Brandon area and then headed down towards Souris to live with another.  Soon thereafter she met Mr. and they married in 1884.

As a couple they went through all the trials of an early pioneer family.  They lost their home to fire in the early 1900’s and were forced to live with neighbors until their home was rebuilt.  In 1906 their lost their 19 year old daughter to Brain Fever.  Conditions that may now be described as brain fever include encephalitis, meningitis, cerebritis or scarlet fever. 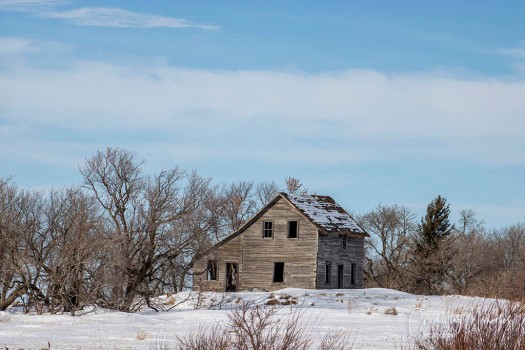 Mr. accepted a position as the secretary-treasurer for the RM.  He was also a police magistrate and would act as an arbiter and then Judge.  Often, infuriated citizens would enter his office only to leave as his friend.  Mr. was said to be a a wise man.  He was part of a committee who pledged to build the local community hall.  On top of that, he was also the secretary treasurer for the local school.

A staunch Conservative, Mr. suffered a stroke while at the polling stations in 1923 and later developed pneumonia.  He died on June 29th.  Mrs. went to live with her son until her death in 1947.

I cannot confirm when this house was built, if this family ever lived in it or if it was the second owners of this land that built the home.

On the day I visited this property for the second time, it was windy and cold and I walked through sometimes knee high snow to get a better shot of this house.

I’m not sure that I won’t go back there again for yet another look.

Back in February, on a beautiful sunny and mild day, I went out.  Just my camera and I.  It was just what I needed.  On my way home I thought I’d check for another place when I decided to check out an old favourite of mine, in the winter. 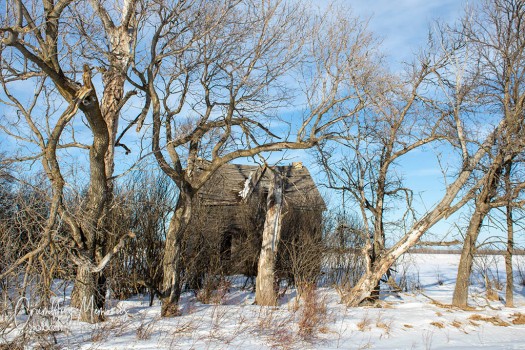 This house was one of the very first contacts I made and I often think I’d like a re-do of the first shots that I took because of the growth I’ve made in my photography.  I may have to put it back on my to-do list. 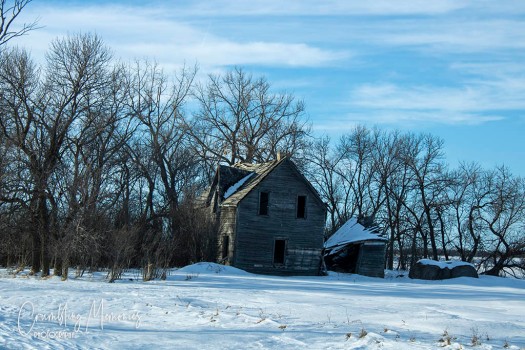 Spring is the perfect time to get out and work on your night photography, especially milky ways.  Its something I’m interested in but not something I’ve done a lot of.  Hopeuflly this year I’ll make the time to do more of it.

The other evening, my husband was out picking up our son from hockey practice when he called and said, you  might want to photograph the moon.  He advised me to be fast and boy, he wasn’t kidding cause by the time I got out there and found the perfect spot, it changed drastically.

Since finding the Snowy owl around Christmas time, I tend to drive down the backroads looking up now.

Yesterday on the way back to Killarney from picking up T, I thought I’d stop again to take photographs of this old barn.  I have taken photos of it in the past but I was itching to take a photo of something. 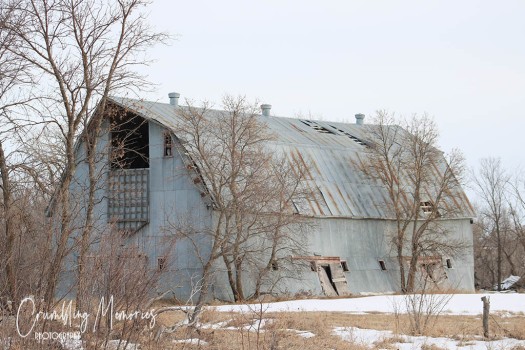 T and I spotted it right away.  So I got the long lens on and had a look.  It had its back to us.  I framed my shot and honked the horn.  This could only go one of three ways.  It would turn, it would fly out or heaven forbid, it would fly into the barn.  It turned.

It stayed until we left.  I discovered today that I need to do a lot more expermimenting with my long lens to get the quality of shot that I expect from myself and the lens.  I do realize that the longer the lens the harder it is to get the sharpness that I want.

There’s a good chance that this owl has a nest nearby.  The Great Horned Owl breeds in January and is nesting by February and March.  By the time the migratory birds return to the province, somewhere nearby, there will be a nest full of owlets.

I hope to see this one again, soon.