I’ve have visited this location a couple of times now.   The first time was hard as it is Reg’s old home and after his family moved away it was the victim of terrible vandalism.  I can’t imagine going back to my childhood home and seeing it in such disrepair.  So, the first time I was there I did not go inside.  I explored the property with Reg and heard about all the things he built and did as a young man with his Dad, his brother, his dog.  I know which trees he planted as a boy and the tree he calls Grandpa’s willow.  I enjoyed the view of the Long River through the property, winding and weaving and winding and weaving again.  The rock road they made across the river at a shallow, narrow point where they could drive their vehicles across.  That him and his new bride made this home their home for a period of time before they moved away to B.C.

Reg’s grandparents immigrated from Russia in 1926 and began farming in the Holmfield area.  Reg and I have something in common, we are both first generation Canadians.

The second time we went, my family joined us and we explored more of the back country and we just walked and talked.  Again, I explored outside before finally deciding to go in.

There are a lot of neat little places and finds all over this property and you could literally spend days here exploring.  We walked through pasture and along the river, we found beaver dams, lady slippers, driftwood.  Reg pointed out the fence posts he recalls pounding in as a boy. And he showed us the rock where he buried his dog.  The property is holds a dear place in his heart and he speaks with such pride of what it was when he was a boy/young man.

This is also where I have taken some of my favorite still shots of barbwire, old posts, hammered in nails in a granary.  And I now know how he lost the tip of one of his fingers in an auger accident.

When I think about my visits to the Sawatzky Homestead I think of all those things and the photo Reg took of my husband and my daughter crossing the Long River.  What a Dad wouldn’t do for his child.  Makenna slung over Cade’s shoulder carrying her through the water and rocks while holding her “dragon horn” she found on our walk. 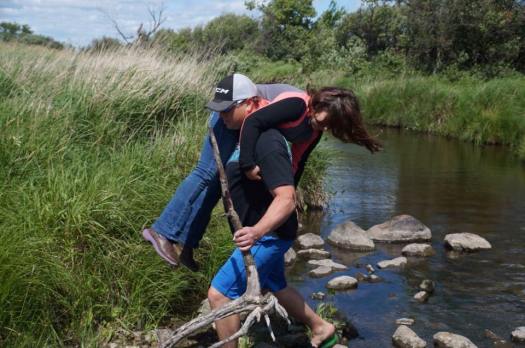 Or the photo of my on the old jalopy car he had as a toddler.  He dug it out of a scrap pile and tried to sit inside it realizing the only way to ride it now was on top of it.

Great memories for all.