One of the things on our to-see list for our trip was a ride up to the Sea to Sky Highway to ride the gondola and see the Shannon Falls.  Well once the clouds roll in, everything “socks in” and ruins the views of the ocean and mountains.

Drizzling, we headed up the highway anyways.  The ocean was completely covered and I couldn’t see anything on the way there.  When we finally came upon Shannon Falls, it started to rain just a little bit harder!  Go figure.  Thankfully the trails to the falls are treed in so the rain was more of a drizzle.  This was not what I wanted to see as we headed up!  It certainly brought back our trips to the Grand Beach Campground as a kid, being paranoid of coming across a bear on the trail.  It was at this point that I announced to my family that if a bear was to come, it was each man for himself!

Shannon Falls is composed of a series of cliffs, rising 335 metres above Highway 99, making it the third highest falls in the province.  The tumbling waters of Shannon Falls originate from Mount Habrich and Mount Sky Pilot. 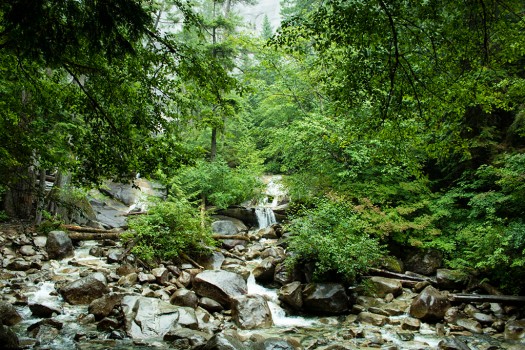 In 1792 Captain George Vancouver set up camp just west of the falls. The falls were named after Shannon who in 1890-1900 owned the falls and surrounding area and used the clay deposits to make bricks. He then sold the land to Brittania Copper Mines in 1900. In the 1930’s, the area was used as a relief camp for the workers building Highway 99. In 1976 the area was purchased by Carling O’Keefe Brewery, who used the pure mountain water to brew their beer, and made the area a logging show park. In 1982 O’Keefe donated the land to BC Parks. Throughout the park area there is evidence of logging activity that occurred here roughly 90 years ago. A number of excellent spring board notches on old stumps are scattered throughout the forested area and much of the deadfall also exhibits evidence of the logging techniques of this period. 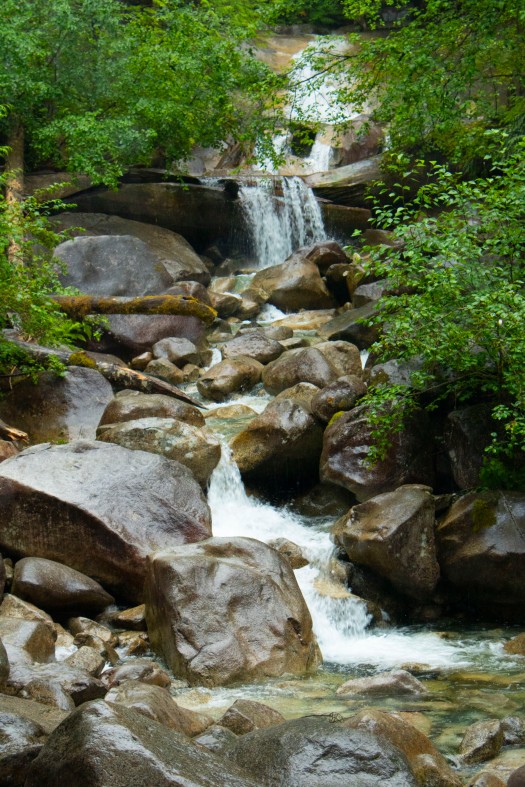 This park holds significant spiritual value to the Squamish First Nation, the first people to live in this area. They told of a two headed sea serpent, Say-noth-ka who lived in and around Howe Sound. According to legend this beast travelled both on land and in water. Some versions say it was Say-noth-ka who formed Shannon Falls by slithering and twisting his powerful body up the mountainside on repeated expeditions, Say-noth-ka gradually wore down a spillway for those cascading waters.

We only went as far as the third view point of the falls as the higher we went, the thicker the cloud cover became.  And because of the rain, the trail got muddier and muddier and of course, more slippery.  This would be a place I’d like to go back to on a clear, warm, sunny day.