This is another tough one.  I think I’m going to blame the current COVID-19 pandemic on this one as our library is not permitted to do inter-branch transfers.  Anyways, I have some info but can’t confirm other info so I guess I’ll just go with what I know, kinda.

On a recent outing with Cade and the kids, we set out with the intention of finding and photographing one house and visiting a ghost town.  Along the way, we found so many old houses and many of them we didn’t even stop at.  I think I may have found a bit of a honey hole.  Wahoo! 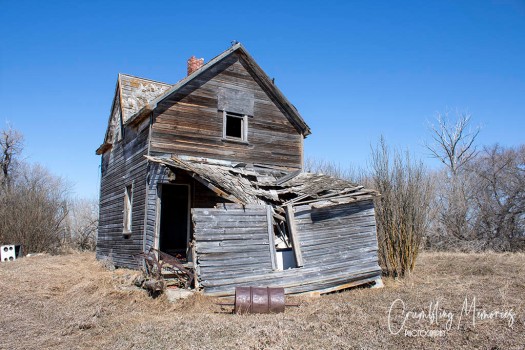 Okay, so back to the history.  The first recorded family of this property owned the land for approximately 10 years.  I was able to find a lengthy family history, I could not use any of the info because I could not match any info with certainty. 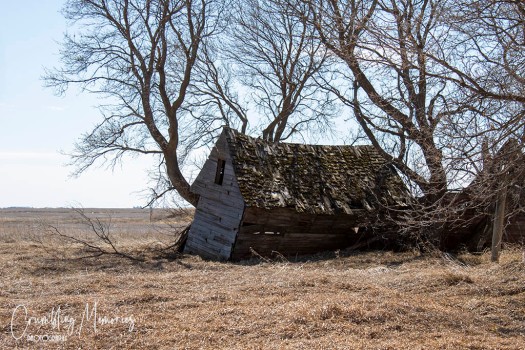 This land turned hands a few times since the start of this RM’s history.  Mr. was born in 1869 in Waterford, Ireland and came to Canada in 1888.  He landed in Brandon on July 4th and the next day headed to his first piece of land by oxen.  He lived in a “shack” until he married and built a new home in 1893.  The land he initially lived on was sold and this farm was acquired.  Did they build this house?  I do not know and I cannot confirm.  They lived here until 1926 when they moved to town.

Mr. joined the United Church in town upon his arrival in Canada.  He was a good singer and often sang to his family.  He had been afflicted with infantile paralysis as a child and was lame because of it but he never allowed this handicap to interfere with his work or his community involvement.

Mr. was very fond of good driving horses and he and his family often drove to Oak Lake to visit his in-laws.  Mr. passed away in 1940 and his wife in 1943.  Together they raised five children.

As I said, the land is then sold again, multiple times but I cannot find any further information.