On the way home and not long after stopping for the foxes, I spotted something else up on the highway just before we got to Ninette.  It was a bald eagle.  I started to slow down and asked Colton to reach in the back and grab the Sigma lens (the really, really long one that I don’t really love yet).  As we approached and slowed, it picked its roadkill up off the road and flew into the trees on the other side of the highway.  In another photograph, a black bird is flying around trying to convince this bird to share its meal.  Don’t think that happened. 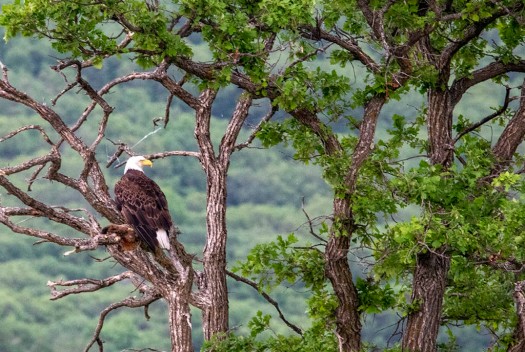 I had been fortunate enough to find the foxes and the eagle during the golden hour.  Unfortunately, I wasn’t able to get a lot of good shots of it and actually came home and listed the Sigma lens for sale.  I have since changed my mind and have decided to keep it but need to make a decision soon as its a very expensive lens to dislike!  And saying that I don’t have the time to play with it is a crock because I’ve been unemployed since May 1st and will be unemployed until September.  Time to stop procrastinating and do something with it.