This is a tough one.  One, I can’t get the books I’d like to have to do the research and two, there is nothing in the stack of about 10 books that I have. 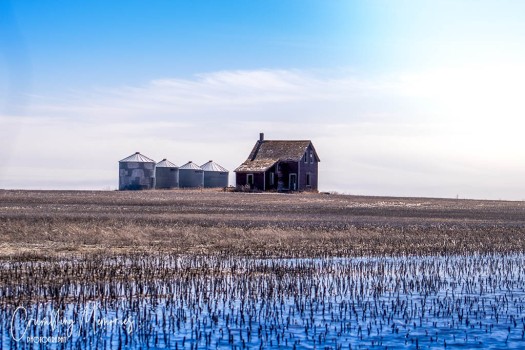 This house was about half way into the section but I could reach it with my long lens.  Of course I wasn’t happy with the closer shots.  While I’ll never turn down an opportunity to take a photo of an old house, it wasn’t why I was in the area. 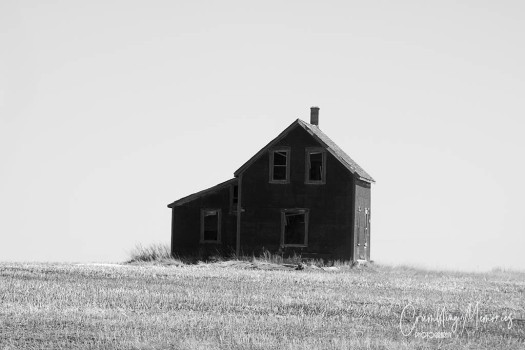 I wish I could share more, but I can’t.

On this day of exploring, I was in new territory.  I had vistited a home on my to-do list and then attempted to get into another but didn’t want to distrub the crop in the field and decided to come back in the Fall. 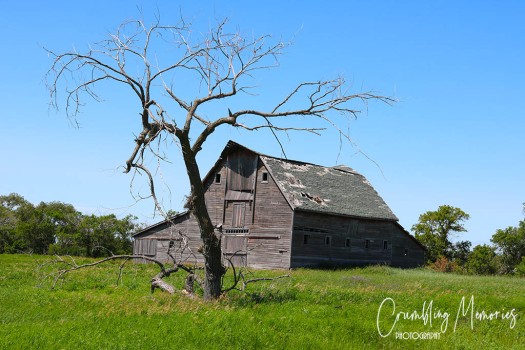 On our way home, hubby (aka Eagle eyes) took a turn of the main highway to investigate a roof in the distance.  As we carried on we came across this old place.

Driving away from what I think will be a real gem, once I get permission, I got all turned around and lost track of the road numbers.  Then we stumbled across this. 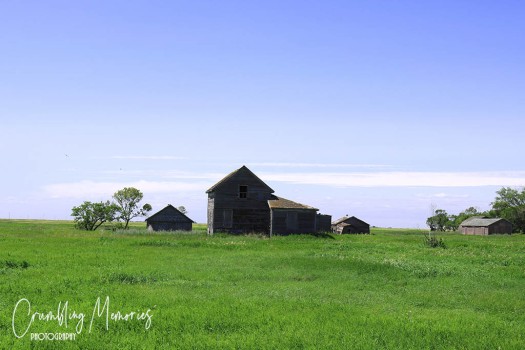 I admit, I don’t like when I can’t find some sort of history on the property.  It feels like the job is incomplete.  Anything I can find doesn’t confirm who the actual land owner is or their life there.

Born on July 1, 1867, AM came to Manitoba at the age of 26 years of age.    He arrived in Hartney on August 13, 1895 on a harvest excursion train.  In the spring of 1897 he bought his first section of land and broke 60 acres using 3 horses and a walking plow.  Two years later, he bought this homestead.  He worked summers in the fields and winters at his camp in the Turtle Mountains.  One winter fire took out his camp.  He lost everything, including his horses.

In 1909 he built this big, beautiful brick house. 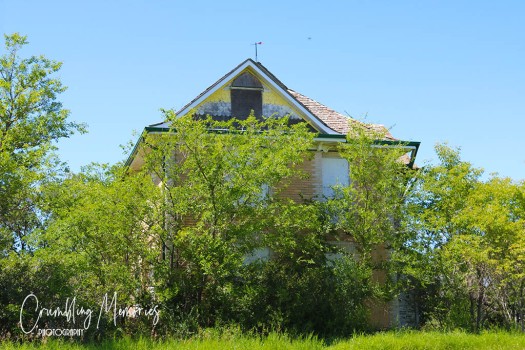 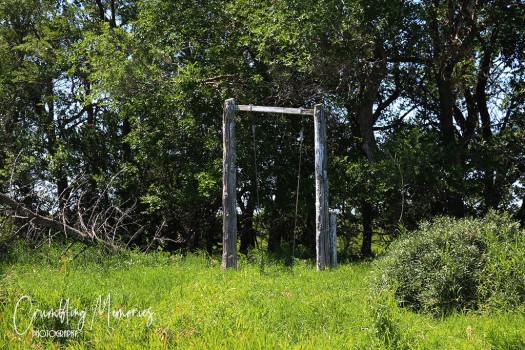 The same year this big barn was built and has been a familiar landmark since.  In 1932 the original barn burnt but another was built on the same foundation that same year. 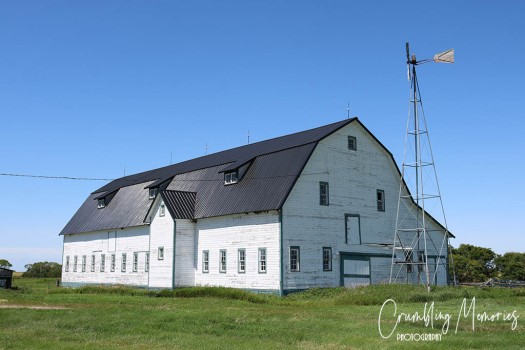 He 1916 they built a large granary with horsepower installed to elevate grain.  The same year they had a 16 volt lighting plant installed in the home.   There was a building there, close to the house that I assumed was the granery.  Unfortunately I did not take a photograph of the building.  Dang.

I have to admit that driving out to these properties, I was a little annoyed the that sky got clearer and clearer as we got closer.  Not the skies I was hoping for.  I don’t typically research the property before I photograph it with the hope that I can pick up all the key parts I sometimes find in the history with the naked eye.  Guess I missed this one. 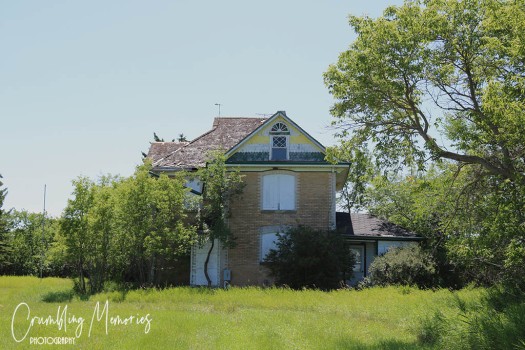 Mr & Mrs. passed in 1962 and 1965, in their nineties.  Their son took over the farm where he farmed the land many years with his wife J, who married in 1957.   R & J had 4 children.  J was married previously and lost her husband at a young age to diabetes.  She was a teacher in the area and remained with her two children. She took great comfort in having her in-laws living on the farm in a separate house.  She eventually met and married R and her and the children moved to this farm.  J stopped teaching to raise her two youngest children.

R & J were both active in their community playing sports, hosting 4H Rally’s and club events.   When farm work was caught up the couple enjoyed travelling.  They travelled to western USA, Hawaii, Europe, Ireland, England and across Canada.

The diagnosis of Parkinson’s Disease forced R to quit farming in 1996 where him and J built a retirement home in town.

The orignial owner of this land came to Canada in 1881 from Kingston, Ontario and I am assuming, built this home.  The family moved into the home in 1882 with they raised 7 kids. 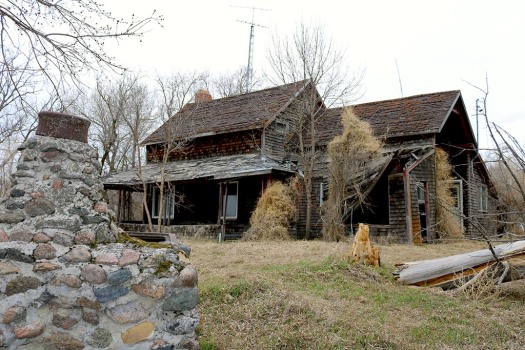 Many more families would rent this home and land and raise there families here as well.  The home continued to be resided in up until 1980, which is the last recorded date that I was able to find.

I will make the assumption that the home was lived in later than the 80’s given the PVC windows.

The yard was very soft and spongee and not knowing what I was in for – I usually ask but didn’t when I called yesterday – I did not know if there were any wells that I needed to know about.  I was also told that the home is known to be over run with masked bandits so I really wasn’t interested in taking a further look. 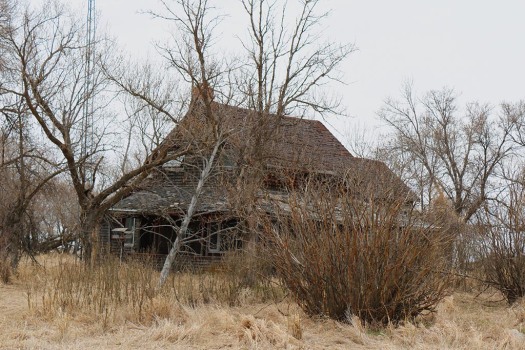 What drew me to this house orignally was the brick fireplace outside.  From the road I thought the house had stone pillars.  When I pulled into the yard yesterday I found the stone stove/firepit near the driveway. 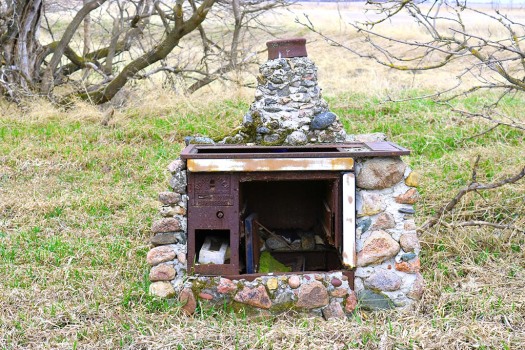 I would have liked to explore a little more.  There were some out buildings and I would have liked to get some better photos of the front of the house but I didn’t want to bother the eagles anymore.  When we left the driveway, Dad was waiting for us high in a tree, giving us the stare down.  Oh and the noise he was making is not what I would expect out of an eagle.

For the last 5 days I have been lucky enough to be able to tour around with my family and today, my husband.  Of course they don’t have the enthusiasm that I do when it comes to an old house but they sure do like the wildlife that we come upon every once and again.

Today while we were going from one house to another we spotted an eagle.  As we drove a little further ahead I spotted a nest and for some dumb reason decided that I needed a photo of it.  Well all I would have shot, picture wise, was a mass of twigs.  Well when I zoomed in, which Cade figures was about 50 yards, was a white head with an orange beak.

I didn’t get out of the car as we didn’t want to distrub this family any more than we already had and we certainly didn’t stay long.  This family has taken over an abandonded yard, the yard we were heading to.  When we left, Mr. was sitting in the tree making his odd little noise, I’m assuming he was telling us to get lost.

I’d like to go back in a couple weeks with a better lens, which I plan on purchasing tonight, to see if I can see any little eaglettes.

I wish I could find more about this house but I can’t!  And its frustrating as hell!  One thing I can confirm, those are the original shingles on the house. 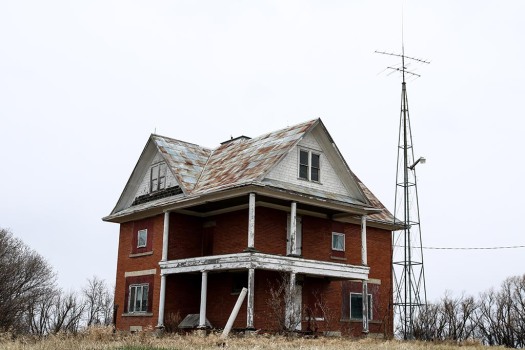 I found this house back in November and of course it was FAR TOO COLD for me to really explore and I did not have permission to do more than take a road shot.

That’s another thing that pisses me off, people who continually enter onto these properties, take their photos, post them online and then when a rule playing photographer comes along and asks for permission, I get the speil about how people don’t ask, they just go in, they take stuff that doesn’t belong to them, they leave the door open, etc.  If you don’t contact the owner and ask for permission, at least have the audacity to not post your photos online!

When I spoke to the landowner back in November and was given permission the first time to take photos, post them online AND enter the home, I was told that the house was built in 1916 and the original owners lived in the home for 18 years.  At that time three of these houses were built in the area.  Mr. could not tell me if any of them were still standing but I do hope to check out the area one day. 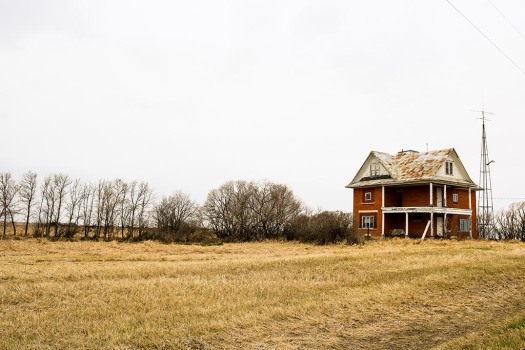 When the original owners moved out of the home it was always their intention to keep the home up.  During the first winter the heating system was tampered with and this caused an issue with the water and heating system and the cost for repairs was worth more than the hassel.  You can tell that when the home was left, it was always their intention to come back.  The interior of the home is solid, sturdy and truly amazing given the year the home was built in.